Cinema communities for Innovation, Networks and Environment (CINE) works to promote film in communities where cinemas don’t exist or are disappearing, focusing on their ability to serve as venues for cultural and social aggregation while sowing the seeds of environmental and food culture among younger generations.

With this project, Slow Food and its Italian and international partners want to support cinema, revitalizing the role of film within local communities. 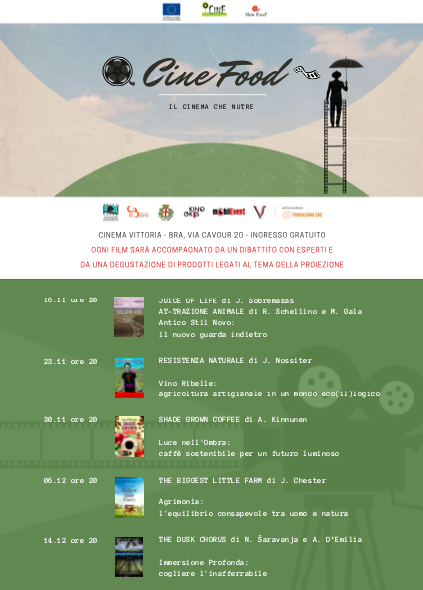 n collaboration with Slow Food and Cinemambiente, the Cinema Vittoria Multisala in the Piedmontese town of Bra organized the CINEFOOD festival, a series of screenings held over five evenings between November 16 and December 14, 2021. Accompanied by moderator Iacopo Zorniotti, the audience included students from the University of Gastronomic Sciences in Pollenzo and from the “Velso Mucci” and “I.I.S. Ernesto Guala” high schools (the latter were also involved in the training project organized in collaboration with the school and the cinema) as well as local residents. They were invited to explore issues around food sustainability, looking first locally and then globally. The evenings proved highly popular, with an average attendance of 160 audience members.